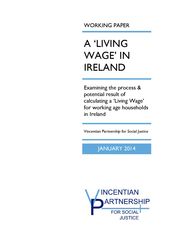 Following the release of this paper a series of discussions and discourse will take place with other interested groups. Subsequent to this, the assumptions made in the calculations will be reviewed in light of feedback received, and refined. Therefore, the result of the calculations should not be taken as the final Living Wage figure for Irish households.