A Living Wage is intended to establish an hourly wage rate that should provide employees with sufficient income to achieve an agreed acceptable minimum standard of living. In that sense it is an income floor; representing a figure which allows employees afford the essentials of life. Earnings below the Living Wage suggest employees are forced to do without certain essentials so they can make ends-meet. 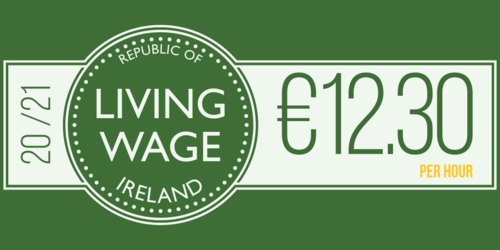 The rate is calculated on the basis of changes in minimum living costs and income taxes. In the last year, many of the items required for an acceptable minimum standard of living reduced in cost – including food, energy, and household goods – an average of 4% in costs (before rent). However, rent costs in the living wage calculation increased by an average of 7.5%. Rising rents wiped out the effect of decreases in other living costs.

If rents had remained stable in the last year, the Living Wage would have fallen to €11.90 per hour in 2020.

Housing costs for a Living Wage worker have increased by an average of 7.5% nationally over the last year. Rent now accounts for over half (54.6%) of a single person’s minimum living costs in Dublin, and over approximately a third outside of Dublin.

Further details on the Living Wage and on the methodology used to calculate the hourly Living Wage rate can be found on www.livingwage.ie

The Living Wage is based on the concept that work should provide an adequate income to enable individuals to afford a socially acceptable minimum standard of living.

The Living Wage is the average gross salary which will enable full-time employed adults (without dependents) across Ireland to afford a socially acceptable minimum standard of living.

Unlike the National Minimum Wage, the Living Wage is an evidence based rate of pay which is grounded in social consensus. It is derived from Consensual Budget Standards research, which establishes the cost of a Minimum Essential Standard of Living in Ireland today.