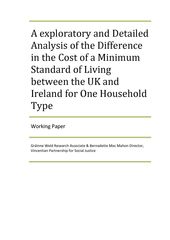 The purpose of this paper is to compare the cost of a minimum acceptable standard of living between the UK and Ireland. To make the comparison, the paper utilises research carried out in the UK by the Centre for Research in Social Policy (CRSP) at the University of Loughborough, and the Vincentian Partnership for Social Justice (VPSJ) in Ireland. Both organizations use Consensual Budget Standards (CBS) methodology to draw up minimum acceptable standard of living 'baskets' for individuals and households in their respective countries1 . This paper draws on one sample household type; an urban two parent household with two children of pre-school and primary school going age. As this paper only examines one household composition, there is scope for a much more extensive comparison between the two datasets. The data used in this paper is based on the cost of a minimum standard of living in 2012.

The aim of the paper is to compare the cost of a minimum standard of living between the two countries and to highlight not only the difference in cost for categories of expenditure, but also the variation and similarities in what is considered necessary for a minimum acceptable standard of living.