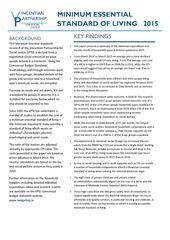 This paper presents a summary of the minimum expenditure and income needs of household types in Ireland updated to 2015.