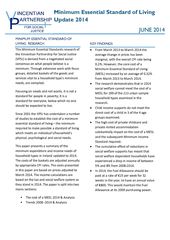 This paper presents a summary of the minimum expenditure and income needs of household types in Ireland updated to 2014. The costs of the baskets are adjusted annually by appropriate CPI rates. The costs presented in this paper are based on prices adjusted to March 2014. The income calculations are based on the tax and social welfare system as they stand in 2014.